Obviously, all women want George Clooney or Brad Pitt (or both…). Besides that, though, what are the top qualities that women are looking for in men? According to the staff at eHarmony (I’ve now come to accept the fact that I will receive 1 to 2 unsolicited emails from them every week for the rest of my life and that’s the card I’ve been dealt...), women’s top 5 dealmakers are:

* An honest man – Honesty is one of their top rated qualities. Who knew??? I didn’t include honesty in my laundry list of qualifications until recently, and I therefore went on to date a bunch of dishonest people. I think I took it for granted that all people are honest (life is hard when you’re that naïve) and I expected suitors to act accordingly. Wrong. I added honesty to my exhaustive list a few months ago and, let me tell you, it’s nice to date someone like that. Ladies, add it to your list. I’ve also discovered that dating someone genuine and sincere is also satisfying (thank you, Lover) – so please add these qualities as well – they’re all sexy.

* An emotionally healthy man – Whoa. That is hard to find. Most people have a few little issues that may creep up now and again, which is acceptable (I really hope so, or else I’m f*cked…). Things to watch for? The man who claims that he is emotionally healthy and free of hang-ups, like Emotional F*ckwit ’08 - he was SO hungup about the fact that he had no hangups – it was ridiculous. Neuroses? No. Neurons firing on all cylinders to help oneself work through issues? No problem.

* A man who can resolve conflicts – Yes, especially if he is dating me. Apparently, men are taught to win fights from an early age. That makes my brow wrinkle in confusion (which I really don’t like because I’m constantly trying to offset all visible signs of aging), because I have always thought that women had to be right. Since when did we start letting men win the fights? There are 2 lessons to be learned here. The first lesson is to stop letting men win all the time – that’s not right! The second lesson is that it is good to find a man who can work to resolve an issue instead of being spiteful and pushy just so he can win a fight.

* An attractive man – Women want an attractive man just as much as men want attractive women. I guess it really is that important. Of course, a good personality can enhance one’s outer appearance (and vice versa), but that’s no excuse to show up on dates looking rumpled and ridiculous. Dudes, you have no idea how a nicely pressed shirt, properly tailored pants or nicely shined shoes can put us in the mood.
Posted by Carrie Blogshaw at 8:03 PM No comments: 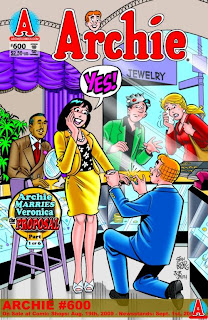 Boys ARE dumb!!! I heard this news last weekend and I’m still p*ssed. I’m in shock! What happened? Do nice girls ever finish last? Surely, in comic books at the very least, the nice girl could get the guy while the snobby b*tch would be left to deal with Jughead’s zany antics???!!!

The circuitous love triangle between Archie, Betty and Veronica has kept Archie Comics readers rapt for over 65 years. 65 years – that is correct. And this is how it ends??? I, for one, have always been on Betty’s side. Believe it or not, I spent quite a bit of time entertaining myself with this thoroughly frustrating threesome back in high school, which is why this struck a chord now. Betty, the heroine, is natural, sweet, genuine and caring. Veronica, the antagonist and general pain in the a**, is self-obsessed, vain, uncaring and mean. She seems to have the kind of affection towards Archie as she does towards a dirty dishrag, she uses him as a spare when she can’t get a date with Reggie or someone who is more her style (say, the captain of the football team, her favourite teacher or the branch manager of her local bank….), and she is MEAN to him! On a regular basis!! What gives in this scenario???!!! What are men looking for??? Why does he put up with this s*it??? Does he always leave Betty for Veronica because she has a fast car? A sugar daddy?? A hair straightener???

The other thing that is bothering me immensely (seriously – I’ve spent the whole week trying to sort this out in my head…) is if Veronica is going to say yes. She doesn’t really like the guy… Can she not find someone more suitable? Will Betty find someone more suitable??? Why is it so hard to meet people in comic-book land??? That’s why this story is making waves around the world – it’s so relatable! Think about it – these people have been chasing each other around for 65 years – that’s sick! It’s just like Cosmopolitan City, where one can be single (and fabulous…) and date a string of unsuitable partners for a lifetime! Surely, both Betty and Veronica could go online to meet more suitable partners, or perhaps hit the bar scene… They could join common-interest groups, try speed dating, cooking classes, volleyball, singles cruises or singles day trips to New York City…

Really, the only fair way for this story to end is for Veronica to turn Archie down. Then, Archie could go to the nearest bar, get totally hammered and then go over to Jughead’s to complain about his misfortune with women, only to find Jughead in bed with both Betty and Veronica. Ha Ha!
Posted by Carrie Blogshaw at 5:27 PM 4 comments: 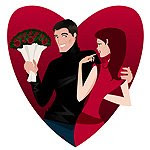 …as brought to you by the gifted authors at Respected National Publication Favouring Female Interest. According to the magazine, the questions listed below are off-limits:

* Does this make me look fat? - If you think so, then it probably does. How are men supposed to respond? If they are honest, they’ll get sh*t on and if they lie, they’ll get sh*t on. How would you answer if your bf came to you to ask if his boxer-briefs make his d*ck look small???!!! That’s right.

* How many women have you slept with? - Make sure you are ready for the answer. The fact is that, if one is single and in their 30's, then one has probably slept with a few more partners than originally anticipated when they were younger, hotter and had no idea that one could stay single for such a prolonged period of time, but I digress........ The only safe question to ask is if he has been safe in his transgressions. I grant you permission to ask that question, but ONLY that question.

* What are you thinking? – This is hilarious. I can guarantee, in fact I’d bet a paycheck, that he’s not thinking. At all. Nada. If he looks perplexed, he’s probably trying to stage a plan in order to pass gas in your presence without you noticing. Or something like that. At most, he may be trying to plan how his favourite football team can best play their next game, but that’s probably about it….. Looking for a specific answer? Ask a specific question.

* Where is our relationship going? – Right out the window if you ask that question!!!

* If you could sleep with one of my friends, who would it be? – DANGER DANGER DANGER. DO NOT ask this question. Ever.

* If I died in a freak hair-dying accident, how long would you wait before moving on? – Apparently this is a passive aggressive question that is going to instigate a fight. How could anyone know that? What if he meets a hottie at your funeral??? Hey, you never know how life works!

* (While holding someone else’s baby ask:) How many kids do you want to have? - Why don’t you then ask what kind of suburban-nightmare-semi-detached-can’t-tell-your-house-apart-from-your-neighbour’s home he’d like to live in and what kind of death-of-sex minivan he’d like to drive? Start training now, because you’ll have to sprint like hell to catch up with him after you put that thought in his mind…..

* (In regards to either size or duration or both) Is that it? - Yes, if you want it to be the end of your relationship.
Posted by Carrie Blogshaw at 9:52 PM 2 comments: