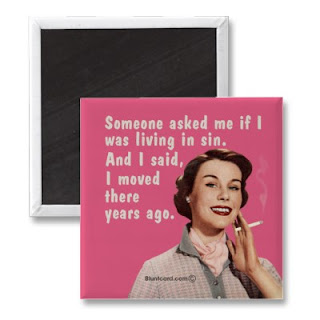 That's right. G Spot and I, two sinners, are living together before marriage. In a church. God would be so unimpressed. Heh!
The big move happened last week. We have now been living harmoniously in our church conversion condo and it's been a lot different than I ever expected. I have droned on about my fear of living with a man for many, many years. The longer I put it off, the scarier it got. Finally, it became a big, scary monster hiding under the bed. I worried about everything: Would our sex life be ruined? Would we start annoying each other? Would his lack of ability to change the loo roll drive me insane? Would we start fighting over when a lightbulb would be changed? Would we start to hate each other?
I guess I figured that would happen sooner rather than later. However, we took the time to trouble-shoot the scenario. We entered into this arrangement with both our needs as top priorities. We are both private people and we appreciate space. We both have activities that we enjoy doing apart from the relationship that we do not want to give up. We both enjoy our sex life and do not want to f*ck that up. So, what did we do? We decided before moving in to repect each other's space. We respect each other's schedules. His quirks and habits are not annoying me yet, and he claims the same of mine. We had a few bulbs that needed to be changed, and it got done. And, most importantly of all, we are still having sex. Thank God!
Posted by Carrie Blogshaw at 7:38 PM No comments: