Here's a tip: Figure it out, people!


Peace.
Posted by Carrie Blogshaw at 9:06 PM No comments: 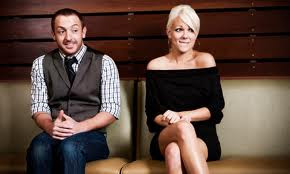 That's what I would have been begging for if I'd been on the disastrous date that I witnessed this weekend. Catching up with one of my fabulous friends over a delicious dinner at Swanky Sushi Spot in Cosmopolitan City, we found ourselves sitting next to the saddest sushi date ever.
She got there first. Finally, her date arrived. He fit in at Swanky Sushi like I fit in at church... Anyhoo, I have to say, I was fascinated. I couldn't believe my eyes. She was fairly attractive, a good conversationalist and was having a good hair day. He was slovenly, fatter than a Baconator and so nerdy that he actually had a pen in his shirt pocket. At first, I thought they might be:
* cousins
* colleagues
* on a blind date (where make a runner at any time and go home and sue the matchmaker)
* former inmate and parole officer (she the inmate, as he was dressed like a parole officer)
Well, not so much. After staring at this not-so-dynamic-duo for most of dinner, we watched as she allowed him to kiss her hand. Shocking. We noticed that she kept disappearing from Swanky Sushi often and then returning to the table after lengthy absences. During which he would sit and stare at my friend and I. We figured that while she was gone she was:
* dealing with a nasty UTI
* pretending to deal with a nasty UTI
* smoking
* smoking crack to deal with the fact that she was on the worst date of all time
Towards the end of the evening, they were involved in shocking and stomach turning PDA's. It was so bad that we were almost unable to order dessert. What bothered me so much? I saw what might be my future. And perhaps the future of other sexy singletons who, around a certain age, might become relegated to the ranks of women who have to date dorks because all the good guys are gone.
At the end of their dinner, during which she ate like a queen (and he almost ate her), she took off and left him alone at the table. Well, not technically alone, as she did leave him with the check!
Posted by Carrie Blogshaw at 9:35 PM No comments: 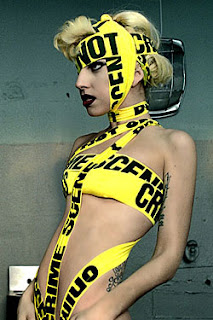 In looking for new mancation couture options, I happened upon this photo of Lady Gaga. Clearly, given the caution tape couture, the Lady has been on, or is currently on, mancation! Who else could pull off the task of making tape featuring the international sign of danger look this sexy?!
I guess even superstars get tired of dating their share 'little monsters'. I am obviously in very good company here and maybe, after my mancation period ends (timing is to be confirmed, as I'm enjoying it so much...), I'll be able to forget each and every Bad Romance!
Posted by Carrie Blogshaw at 7:51 PM No comments:

Can I Be Honest With You?

Watch it and weep! This video is hilariously humourous and horrifyingly honest. It is basically how I should have negotiated with Big Daddy and many of my exes before him. Honesty really is the best policy. Enjoy, my sexy singletons!
Posted by Carrie Blogshaw at 7:27 PM No comments: