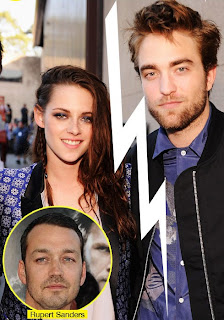 Now, I am not a math major, however that is a bad equation!
I would like to say that I was never a fan of the surly and miserable looking K Stew.  Although R Pat doesn't seem much happier, I could never understand the draw of a sullen, miserable woman.  I still wonder what on earth is going on with Posh and Becks...
Yesterday, the news broke that Kristin Stewart has cheated on her longtime boyfriend, Robert Pattinson with the director of her last film, Rupert Sanders.  Sanders is also a cheating man-whore and is married (to a model, hello!) with children.  Yowza.  I have always been amazed how R Pat stuck with Kristin for as long as he did, but can anyone explain the draw of this dour and dirty-looking (seriously!  like, WTF?!) "dish"?  I thought that men are attracted to bright, sunny and sexy singletons... What am I doing wrong here?  Do I need to embrace (or, at least, find) my inner vampiric dark side?? Should I become pale, morose and stop washing my hair???
I will say that it was apropriate of KStew to issue an apology before the story was broken by US Magazine.  It was also apropriate that R Pat moved out of their shared home this afternoon.  I await news come the breaking dawn (heh!) on the feeding frenzy of the vampire vixens on Edward Cullen.  Bye, bye, Bella!
Posted by Carrie Blogshaw at 3:19 PM

I agree, I never understood this pairing. She is gross, trying to sound all sorry now. She only apologized because she'd been caught.

You are correct, bluemoon! Us Weekly contacted K Stew to let her know about the pics and proof of her affair and gave her 24 hrs to break the story to R Pat herself. They are young, she is foolish and he is better off!
Hugs,
Carrie